High Sec space can often be like the mythical Bermuda Triangle of Earth.

It is a strange place, filled with strange inhabitants, and much more strange events that cannot often be explained.

A few days ago, S-N-G grew butt-hurt about having his gank ships bumped by members of  the Off-By-One Errors corporation.  So, S-N-G decided to strike back and declare war.

However, things went quickly down the toilet.

The Shiny Violent Killing Toys allied with the Off-By-One Errors corporation and killed a Tornado and a Thrasher belonging to S-N-G.
This caused him to send a surrender offer, which was refused.

So the other night, S-N-G spent several hours sitting at the Jita undock, in a bowhead, with a 200 million ISK kill-right.  Normally, this is some sort of kill-right scam, or standard EVE fundraising event.

Unfortunately, no one was taking the bait, as no cookies or popcorn was offered in exchange.

Nothing happened to S-N-G until...

... Jennifer en Marland decided to go and pop him with a Talos, on the slim chance that she could kill him.

During that whole time S-N-G never reacted, never moved, never did anything and yet when his bowhead exploded, he docked his pod before it too could be blown up. 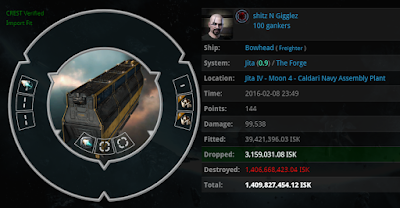 We only can assume this was his way of saying, "I'm sorry"