During one's career in the Militia, fighting High Sec criminals as part of the PreCrime unit of Concord, it can be difficult not to develop a very low opinion of the gankers, their motivations, and mental acumen.

Most often times, the local channel is a ticker-tape display of criminal mendacity, thought crimes, and psychological warfare of a level only found in the sand boxes of planetary elementary schools.

It's hard not to judge.

On rare occurrences, you come across criminals who respect the rule of law, and respect the cat-and-mouse game played by both sides.

However, most of the time, it is just a continual display that the ctrl, c and v keys are still functioning within the criminal underworld, thus proving, that the F1 key is not the only faded key on the control board within the pods.

The High Sec criminal underworld likes to portray itself as "Always Winning", the place for "Elite PvP",  where "AG always fails, fails everyday" and a place where Bros can be Bros, full of fun and camaraderie, and free ships.

And then comes along the ugly truth. Video evidence that what happens behind the scenes, behind that false picture copy-pasted into local, which only confirms that their world  is quite dark and ugly, exemplifying your lowest estimations of the criminal mindset.

Sometimes your gut feeling of criminals are too spot on.

ThatOleSerpent had only, hours earlier, screwed up the gank of an Ark in Sivala.
You can enjoy his stream here.

An Obelisk carrying multiple billions was being bumped in Madirmilire.  The Goon criminal fleet was forming, and ThatOleSerpent was streaming madly away -  live, unedited, and undelayed.  Fleet channel, open gankers comms... it was lovely.

The Militia formed up, responded, and saved the freighter from the first gank.

Another attempt was to be made, but... mistakes were made.

The gank fleet could not get its act together, the FC was pointed, and then... things got ugly. 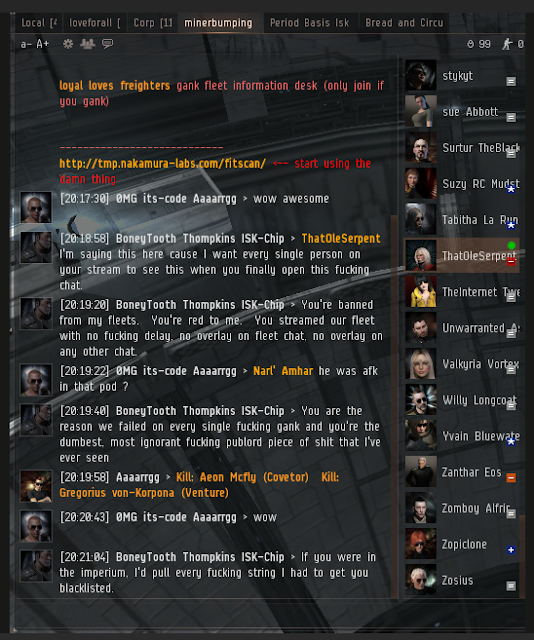 We conclude with the final bits of the comments of his twitch stream.