The Militia sent a scout to the area to check, and noticed a Goon Machariel heading in the same direction.  Nothing of note was on the Madirmilire gate, so the scout jumped into Niarja.

Indeed, there were two Machariels and several ships camping the gate.  However, it was the Mercenary group Free Candy Get In The Van Alliance.  The alert was canceled, and the trade lanes remained safe for the moment.

And then the Goon Machariel entered Niarja. 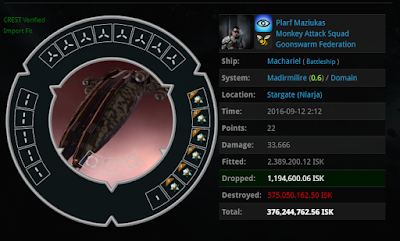 It has been said, that a monkey fitting ships at random for an infinite amount of time will almost surely fit the perfect ship, the likes of which that would cause the Hand of Bob to immediately nerf it.

This is not that ship.

If only Goonie Plarf had that 7th Inertial Stabilizer, he might have been safe.
If only.