The Tax Collector criminal gang were stationed in Uedama, looking to steal freighter cargo. They had a Machariel - HSM Bumplord Rusell - stationed on the Uedama/Sivala gate.

As the Uedama situation was watched and monitored, they were able to intercept and steal cargo from a freighter in Niarja, using a second Machariel.
Of course, they thought they were very sneaky and clever, and started flapping their arms and shaking uncontrollably in Local.

Bumps were happening off and on in both Sivala and Niarja, with Bumplord appearing lazy and not too interested.  He would bump once or twice, give up and slow boat back to the gate.

Finally, a persistent bump on a Charon was reported in Niarja, and the Militia moved to intercept the gank fleet in Kamio. 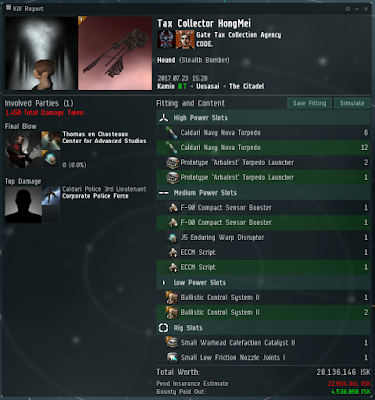 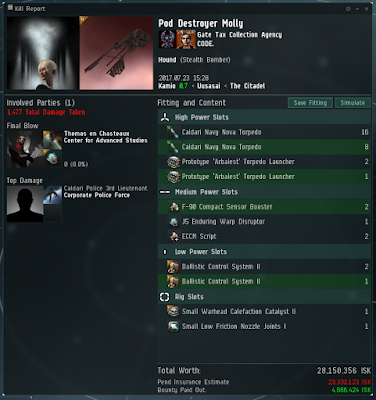 A GF was issued in local... but,  it was met only with silence.

Which was odd, because they couldn't stop talking just a minute earlier.

But there was no time to dwell on such things.  A Charon needed to be saved!

The gank fleet (minus 2) landed on target in Niarja and... nothing.  The scene was a mix of flashing red, blue wrecks... and a lone Charon surrounded by the Militia and a very sorely gank-blocked Machariel.

The Failure Notification System activated, and a message relayed in local.

Again, you could hear a pin drop in the Australian Outback back on Earth, as the freighter was repped to full health across all bands of Hull, Armor and Shield.  The Tax Collectors did not return to Niarja for a second attempt, nor did they return to Uedama.  Instead, they logged off, without uttering another word.

Nevertheless, a Save Mail was generated, and good content was had by... most.. as the Charon warped freely away.

Azov Rassau said…
lol I once saw this lame Tax Collector gang in Jan. They tagged their sec up, undocked in not-empty pods and warped to the highsec gate only to get themselves smartbombed pretty well as they landed (IIRC All of them vanished lol). Local suddenly went like -6 hahah

Another great post btw. I love it when the talker-type gankers suddenly go absolutely silent after failing or getting their gank ruined.
July 25, 2017 at 6:27 AM

Unknown said…
They don't consider the fight over until they win. Just like children to change even their own rules to make sure that no matter what they win. Such Failures.
September 29, 2017 at 10:32 PM