Soon thereafter, CODE's freighter ganking operations were halted and Siegfried disappeared from Uedama. We checked the adjacent systems and found nothing.

We sent a scout ahead to Madirmilire and found Siegfried bumping an Orca 300K+ from the Niarja gate. The Orca pilot was Adam 187 of Knightrage Industries [KR I]

An Astero from the Knightrage corporation arrived and attempted to web the Orca to allow an escape, capacitor issues and the aggressive persistence of the Machariel bumper proved too much for the corp mate.

Once the rest of the HSM/AG forces arrived on grid, two of the Orca pilot corpmates arrived in Gnosis and began attacking the Orca. The event was puzzling until we realized the "corpmates" were CODE awoxers.

The Orca Pilot and CEO logged off for the rest of the encounter, though his ship was aggressed and warp disrupted by the awoxers.

We repped the Orca to full health again and again. CODE brought in a third awoxer, this time in a Brutix, and CODE still could not break our reps on the Orca. 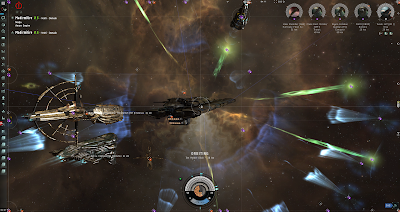 CODE then brought in a small gank fleet, and attempted to gank the HSM/AG rep fleet, and each time they failed.

The Militia's dogged persistence forced CODE to a draw, and they stopped trying to actively gank the Orca.

With the pilot AWOL, CODE exhausted, and a stalemate that would last to DT, the Militia brought in a ship with fireworks and celebrated. The Militia left the field, knowing there was nothing more we could do, as we had proven our own skill and determination. 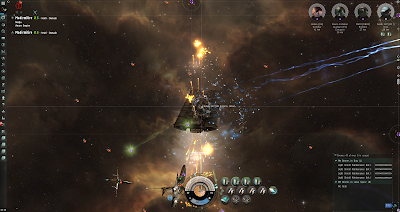 Update:  The Killboard finally showed the KM (or it was manually loaded) and can be found here, with over 1 million damage recorded against this Orca, with a battle that spanned over 2 hours long. Many attackers, including a third awoxer are not listed on the KM, as those participants engaged long before the 15 minutes leading up to the final death of the Orca, after the Militia had left the field.